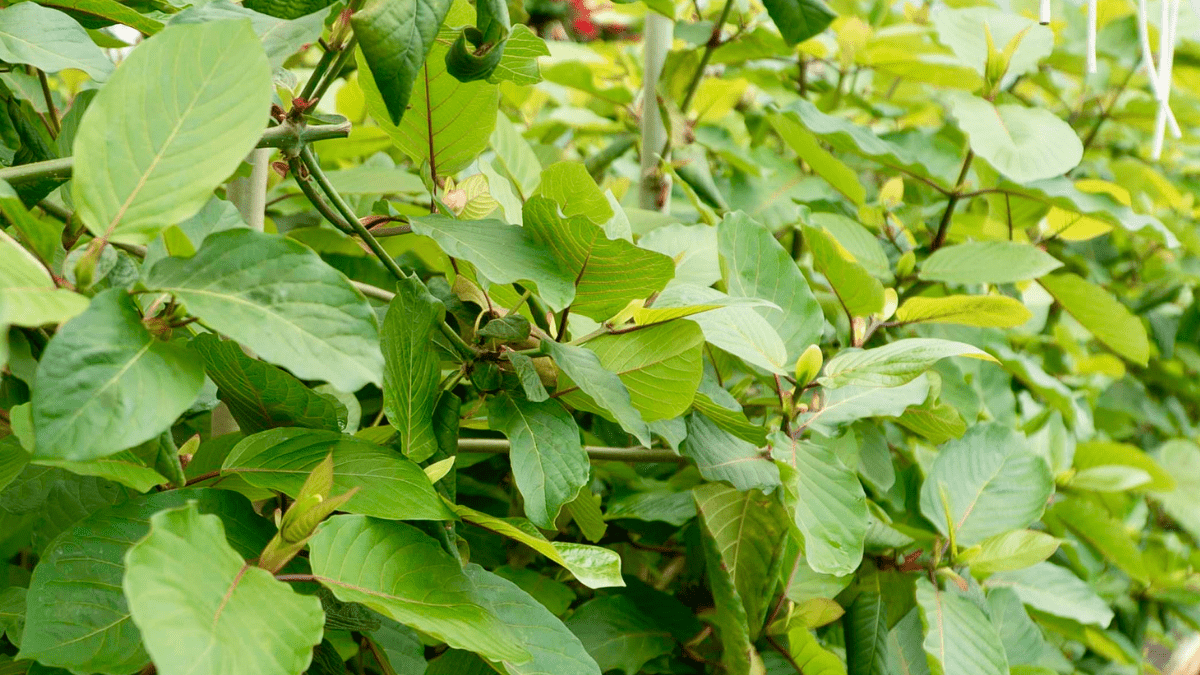 Does Herbal Tea Have Caffeine?

So if you’re looking for a warm cup of pick-me-up, but avoiding caffeine, you may be asking: “Does herbal tea have caffeine?”

To start, we need to address the elephant in the room. For you tea snobs and quiz bowl champs alike, we’re well aware that “tea” has a narrow and specific meaning.

But it also has a broad, conversational meaning too. By definition, “tea” is a hot water beverage made from the leaves of the Camellia sinensis shrub.

You’ll likely recognize this plant by it’s colloquial names: black, green, oolong, or white tea. All these teas come from the same plant, and their differences are the result of particulars concerning how it is harvested and then processed.

Teas from the Camellia sinensis bush will contain caffeine. In nature, caffeine serves as a pesticide which protects the tree from hungry bugs.

While it may deter bugs, it has attracted hordes of thirsty humans. So unless your tea has been synthetically decaffeinated, C. sinensis tea will always have caffeine.

And if you are in love with quenching your thirst with a warm cup, but looking to stay away from caffeine for one reason or another, you’ve got to start barking up a different tree.

The conversational meaning of “tea” is much broader than one species of bush in Asia. For most people, when they say “tea,” they’re probably referring to the result of steeping something in hot water. Technically, and depending on how you go about it, the correct term would be a tisane, infusion, or decoction.

A tisane is when herbs are added to hot water and left to steep. By this criteria, all herbal teas are in fact herbal tisanes, or just tisanes. C. sinensis tea is also a tisane, but because of its notoriety, gets the more catchy and simply “tea” all to itself.

An infusion is like a tisane, but a little more broad. It catches within its meaning the act of leaving herbs, roots, berry, seeds, fruits, etc., in alcohol to extract the desired components. Broadly, an infusion is when you add plant material to a liquid and let it sit, undisturbed, until the extraction process is complete.

Finally, a decoction is much like a tisane, except the water is actively simmering. Usually decoctions are left for hardier plant material such as bark or roots. That being said, many traditional plant drinks are made in a pot on a fire.

More delicate flavors and essential oils can be lost due to heat degradation or evaporation, which is why decoctions are not for everything. But for those tough to extract goodies hidden deep within the cell walls of the plant, a decoction will do the job.

When to Take a Break from Caffeine?

Caffeine, or 1,3,7-trimethylxanthine for those same nerbs who called out the narrow meaning of “tea” earlier, is immensely popular. Some studies have estimated that 85% of Americans consume at least one caffeinated beverage a day. Globally, C. sinensis tea is the most consumed beverage behind water. If caffeine were to suddenly drop out of existence, the impact would be nothing short of a total shutdown of societal function.

So if everyone is doing it, why would you be looking for an herbal tea without any of the good stuff? There are a number of issues associated with prolonged and increased use of caffeine.

These can range from anxiety, insomnia, and sweaty hands, to heart palpitations and even death if enough caffeine is consumed. For most, however, the reason you’re looking to take a break from caffeine is because it’s not working like it used to.

Long gone are the days of inspirational energy and a heightened mood. Now, it just seems like your caffeinated beverage only serves to cut your withdrawal from caffeine.

If it’s not helping you wake up anymore, it’s only serving to take away the headache and grogginess. With this realization, you’ve hit your wits’ end. It’s time to ask the serious question: “Does Herbal Tea Have Caffeine?”

Most Herbal Teas Do Not Have Caffeine

Sure, you’ve heard that herbal teas can energize you, but that’s what you heard when you had your first caffeinated beverage. Do herbal teas just work the same way by giving you caffeine? Switching one source of caffeine for another isn’t going to work, right? Correct, caffeine is caffeine, and that’s what you want to take a break from.

Luckily, most herbal teas do not have caffeine. Yerba mate, guarana, and yaupon are the exceptions to the rule. However, that doesn’t mean you can pick up any old herbal tea to replace your caffeinated beverage. Some herbal teas are meant for general wellness.

They serve as delicious sources of vitamins and minerals. Some are great for unwinding, like valerian root or chamomile, which is the exact opposite of what you’re going for. When it comes to finding a good caffeine alternative in the form of an herbal tea, you’ve really only got one fail-proof option: kratom tea.

Kratom tea passes the only test that matters right now. Does herbal tea have caffeine? The answer to that question is a big old “nope!”

Interestingly, kratom (Mitragyna speciosa) is closely related to the coffee plant. It inherited its energizing traits, but luckily didn’t get the caffeine genes.

Used by bookworms and bodybuilders alike, kratom shares many characteristics of coffee as well as cannabis. It can be energizing and allow you to focus your mind entirely on the task at hand.

With that, it may also promote a sense of relaxation and restore a sense of comfort and connection with your body. And best of all, like any food, there are hundreds of delightful recipes to spruce up your kratom tea.

Kratom is an evergreen tree that grows throughout the tropics of Southeast Asia. Based on written historical records, we know the leaves have been traditionally brewed into tea, or otherwise chewed and spat out, for hundreds of years. In all likelihood, the use of the leaves stretch back thousands of years.

The traditional use of kratom centers around the Thai working class. Being primarily agrarian, kratom tea is employed for utilitarian purposes by farmers and physical laborers. Kratom energizes the workers while also generally easing bodily discomforts. They find it helps them endure long laborious days in tropical heat.

The immense cultural importance and popularity of kratom throughout the history of SE Asia and Thailand specifically should not be overlooked. The recommended use of kratom is etched in the walls of historic buddhist temples and popular street puppet-shows praise the benefits of the leaf.

Kratom comes in varying strains and colors. At first glance, this nomenclature seems to make sense given the broad geographical range that kratom trees grow in. However, the color and strain naming convention used by US kratom brands is an invention.

From a scientific viewpoint, we believe that the alkaloids are responsible for the majority of the effects felt from consuming kratom tea. However, given the complexity of kratom as a natural product, the alkaloid ratio in products of the same name, but of a different harvest, can be completely different.

Kratom follows a straightforward naming convention. First, the color of the leaf powder is given. This reflects both the age of the leaf when it was picked and how it was dried and left to cure.

Typically there are three colors: white, green, and red. (Some vendors may mix these colors to create novel colors.) Next, the name of where the leaf was harvested or where the tree cultivar was originally found before being transplanted.

With the old conventions crumbling from their inadequate descriptive value, we’ve taken to focusing on the alkaloid content rather than the invented name.

So far, over 40 different kratom alkaloids have been discovered in kratom leaves. Usually, individual trees will contain roughly 10 alkaloids, with three or four dominating.

Currently kratom alkaloid information is scarce, and there have been few studies concerning the role they play in the total effect. Top Tree is intent upon both making our alkaloid ratios known, but also in contributing to the scientific understanding of the effects of these ratios on our tea drinkers.

To do so, we’ve partnered with top kratom scientists out of the University of Florida to conduct a survey of our customers! (To participate, go to https://www.tinyurl.com/KratomTeaSurvey)

Which Kratom Tea is Energizing?

Classically, we were always told that white veined kratom made you the most energized. However, we’re starting to question this old logic. From our perspective, what matters most for feeling focused and uplifted is taking a small enough amount.

Yes, you heard that right, a small serving size will give you a better boost than a larger serving size. It is possible to take too little, at which point nothing will happen.

With kratom tea bags that contain three grams, one or two steeped in a thermos with some lemon juice for 20 minutes should be plenty. If you add more tea bags than that you could start to feel the other side of kratom, which is relaxing and best for unwinding. Since you’re already tired and desperate for some caffeine, stick to smaller servings.

If you’re interested in trying kratom tea, check out our introductory post on this beloved leaf. Take your lessons learned from caffeine with you as you try kratom tea. As the wise always say, “all things in moderation.”

We believe that kratom tea is a great option to try if you want to quit caffeine, or just want to reduce how much you have. And at the end of the day, let’s be grateful that we have so many plant options in the natural world. And as we perfect our relationships with them, it’s good to try something new every now and then. 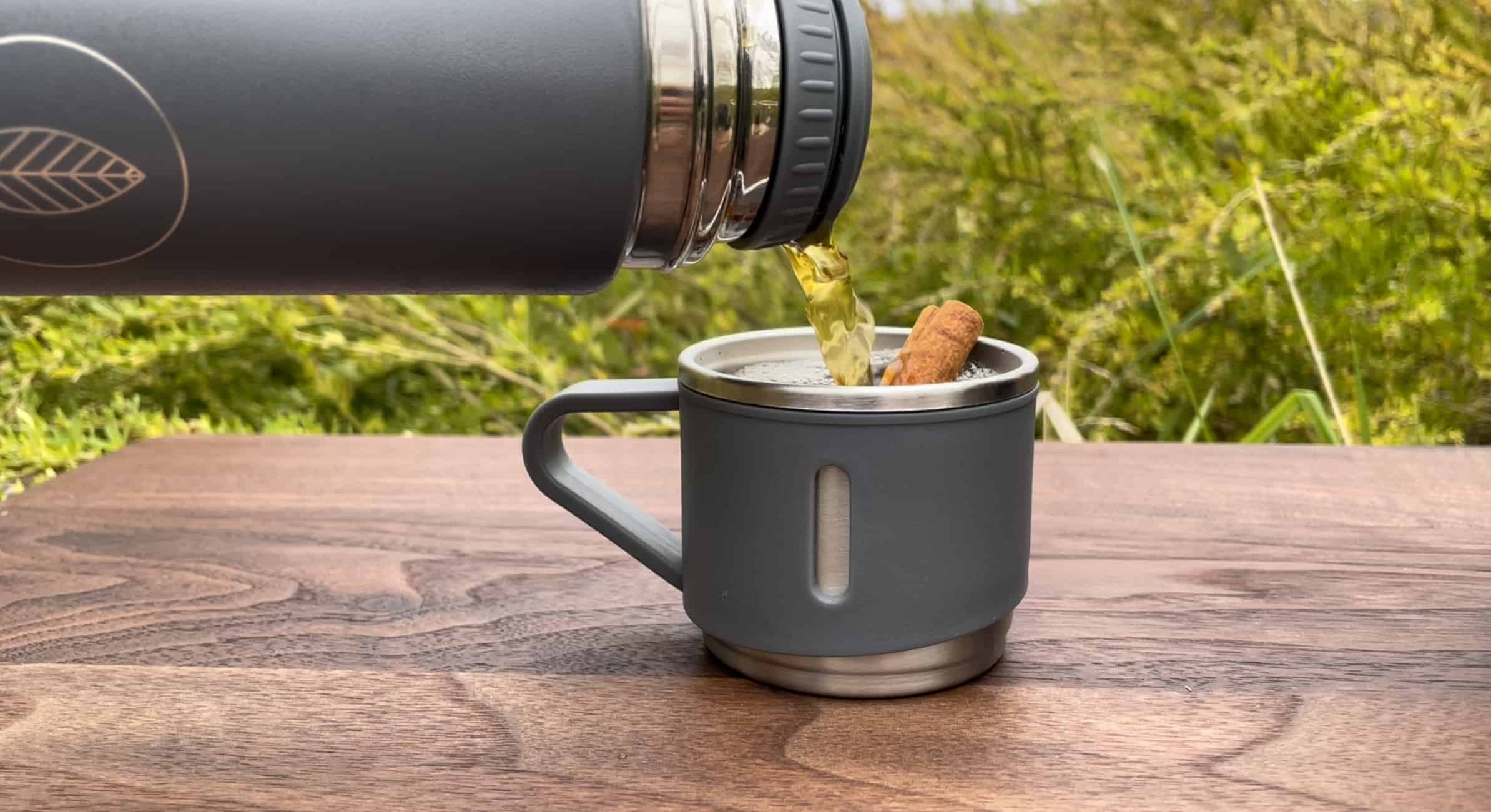 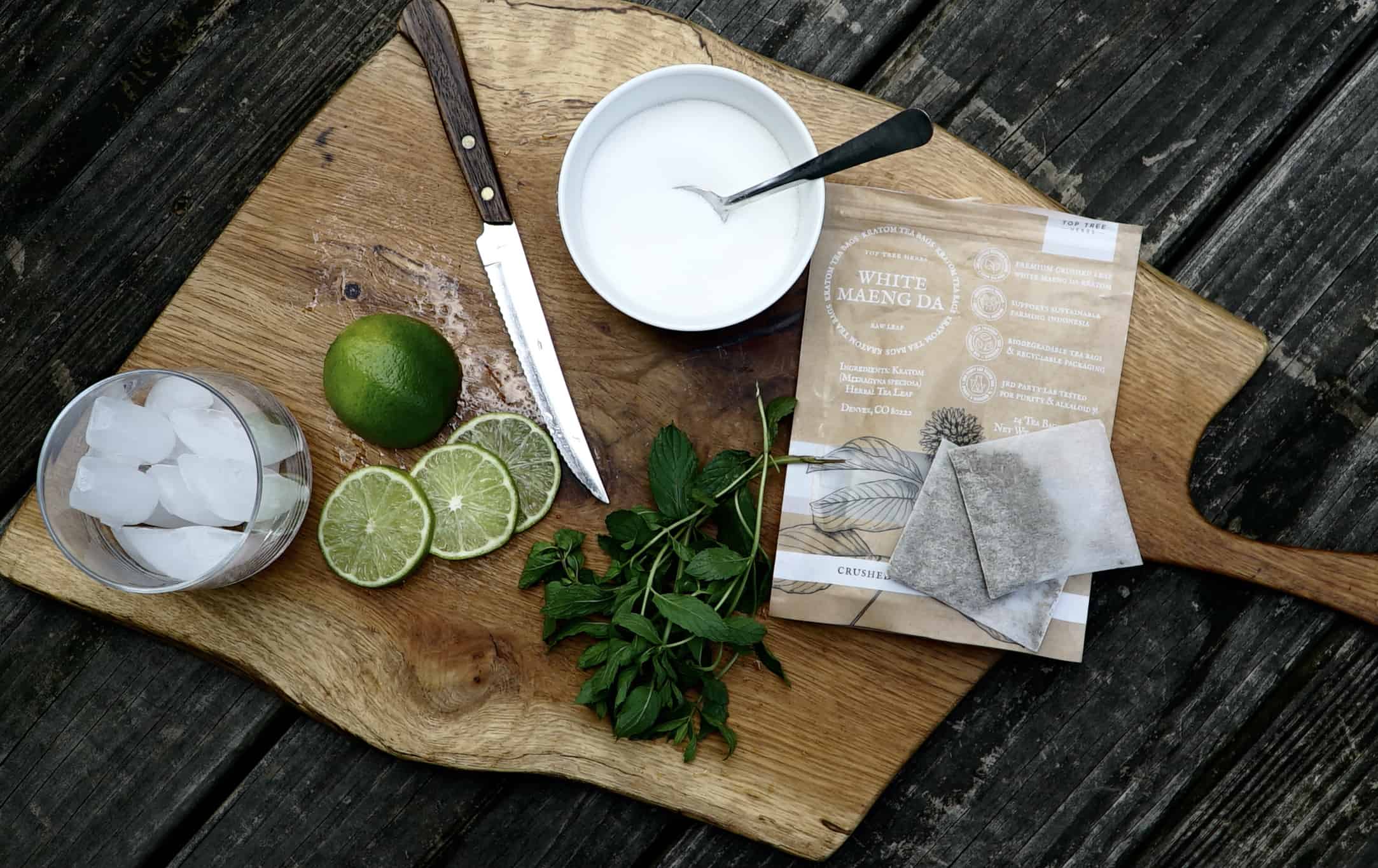 How to Sweeten Kratom Tea 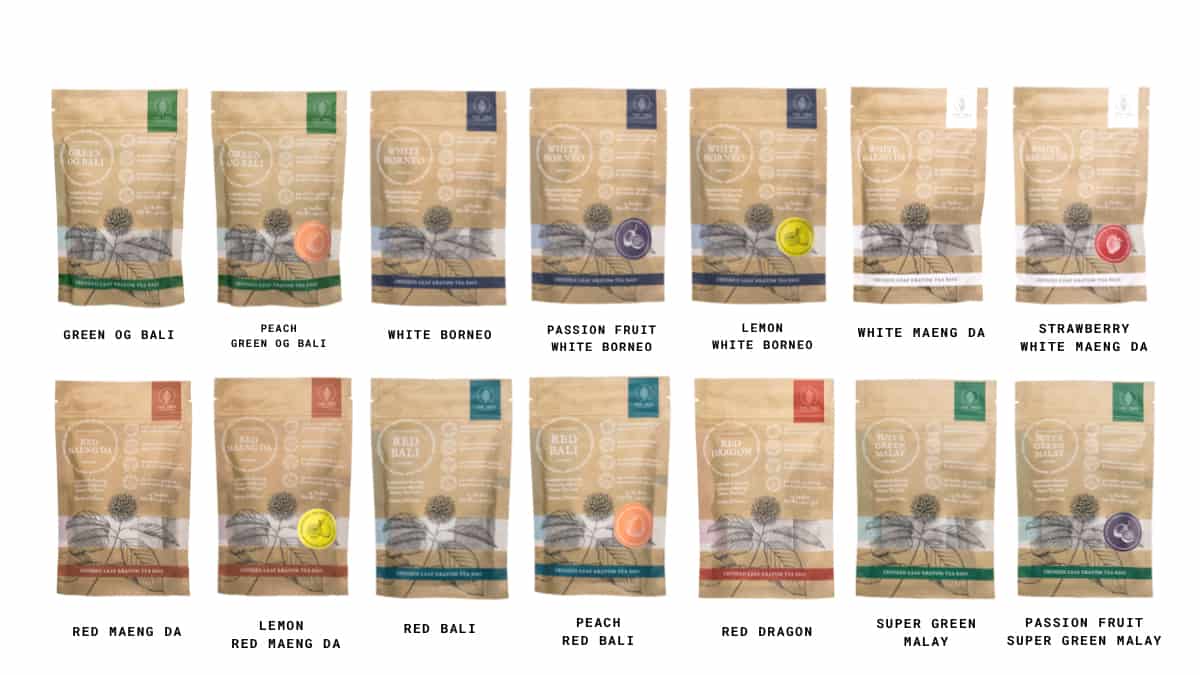